What does plant based mean? Very simply, a diet that is designed to be completely or mostly made up of plant foods. Think of all foods as three categories: Plants, Animals, or processed particles of plants or animals (cheerios, mac and cheese, hot dogs, twinkies) which generally are loaded with fat, sugar, and chemical additives to improve taste, and lengthen shelf life. The vast majority of your diet (whether vegetarian or carnivore) should be whole foods.

Why consider a plant-based diet?

If the fact that one of the most successful ultrarunners, Scott Jurek, runs on plants doesn’t impress you, maybe some evidence-based research will…

The China Study, which is the longest longitudinal nutrition study in the world, found that countries who eat the most fruits and vegetables and the least animal foods have the lowest rates of cancer, heart attacks and strokes. Conversely, countries (like the US) who eat the most animal foods and the least amounts of fruits and vegetables, have exact opposite ratios of cardiovascular disease and cancer. Plants are packed with anti oxidants which reduce inflammation (faster muscle recovery) and actually turn OFF cancer signals to cells. New studies are showing plant sterols to be reducing cholesterol more effectively than medications. For example, soy protein directly lowers LDL (bad cholesterol).

Another well-known nutrition study was done on nurses who were followed for over 20 years. Nurses who had 20% or more dairy (milk, yogurt and cheese) in their diets had increased rates of breast cancer.

So, if you want to run far and fast like Scott Jurek, or our own Tom Bruno – AND you want the best way to prevent cancer and cardiac disease, grab a carrot and read on!

How to eat plant-based?

I have eaten vegetarian for two years now, and prior to, ate very little meat. For me, it started as a health decision that heightened when my former (non-smoking) husband died of lung cancer. Along the journey to vegetarianism, it also became an ethical choice. Here, we will focus on the health and running aspects of plant-based nutrition.

When I decided to go completely plant-based, my running required a little adjustment. Two challenges in particular were learning how to carb load on plant foods (lack of energy) and getting enough protein on a day-to-day basis.

Protein can become a concern if your plant-based diet does not include meat. I try to stay away from processed foods, but due to my busy schedule, preparing healthy high protein grains and greens becomes challenging. I have found that VEGA

makes an excellent line of plant-based protein supplements. Their ‘Protein plus greens’ powder gives 20g of plant protein and 2 greens servings. And with only 120 calories/scoop it makes a perfect post run refueling drink. To match the protein in one scoop, I would have to eat an entire can of beans with four times the calories (not to mention the fiber content).

More: How to avoid stomach problems while running

Most runners will need 40+ grams of protein per day. The rules about pairing proteins are old school. Your body uses and stores what you give it, so eating certain foods together is not important. A few recommendations that are pretty easily accessible are grab-and-go at the grocery and even food chains like Chipotle! Edamame, tempah, tofu, chickpeas (hummus), peanuts, peanut butter, almonds, almond butter, lentils, black beans, wild rice, and oats.

If the thought of drastically overhauling your diet seems overwhelming, some suggest making a few plant-based changes, then build around these changes as you learn more options and variety. Start by doing these three things every day:

1. Have a plant based smoothie

Here is a very short list just to start you off. Fruit freezes well, and you can buy frozen bags of spinach or kale if you can’t use fresh fast enough. You don’t need a $300 juicer to make nutritious smoothies. A blender for large items, a coffee grinder or rolling pin for seeds and nuts works just fine.

Stay away from liquids that have sugar added. Non-dairy milks are also great.

Fruit or plant based sweeteners help you mainly a healthy lifestyle.

Remember what your mom told you! Eat your greens (and seeds)!

2. A green salad every day

Very easy to incorporate whether you eat at home, or have meals out. Also, eat a variety of greens, add cucumbers, carrots, pumpkin seeds, and plant based oils for flavor.

Don’t be afraid to create a plant-based dish when you go out to eat. I have asked for “veggie omelet no eggs” and frequently will order side orders in place of a main dish menu item. Steamed veggies are always available, potatoes, fruit, oatmeal, grits, etc. I generally will make a meal out of 3-4 side dishes for dinner as I prefer hot dinner over a cold salad for my main meal. Many restaurants now offer veggie plate which works well too. Open your mind to the notion that the dish isn’t built around the meat. If you do eat meat, think of it as more like a condiment. Use it for flavor, not for nutrition.

If you have any questions, health concerns, or suggestions for follow-up articles, please feel free to comment below. 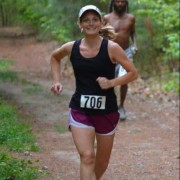 Kati is a master’s prepared Nurse Practitioner board certified in family practice. She currently practices Internal Medicine in Florida. Kati has a special interest in wellness. Her graduate studies focused on behavioral interventions for weight loss. She is certified in Plant Based Nutrition. Outside of work, Kati is an avid runner, and... Read more about Kati