When you began running, you probably started with 5ks for some period of time, then tried some half marathons, and eventually “graduated” up to the marathon. In the beginning, running 200m repeats made a lot of sense since your goal race was only 5,000m. But maybe after a few years your running goal is simply to set a marathon PR. Do you still need those short repeats in your training routine?

Short intervals regardless of distance

Well, according to coaching guru Jack Daniels, the answer is a resounding YES regardless of what distance you are training for. Granted, you won’t be doing nearly as many short speed intervals if your goal distance is a half or full marathon, but they are still an important building block in your training. It’s the “building block” concept that is crucial. The reason is simple and also makes logical sense. Regardless of your goal race distance, you should split your training into phases. This is overlooked by many training plans, but it will have a dramatic impact on your running.

The details of each training phase would require an entire book to describe, but I’ll spend a short paragraph giving a high level overview. Phase 1 focuses on building your base mileage. You’re building mileage with easy runs and some strides thrown in a few times a week. Phase 2 works on raw speed, and your 200m intervals become a staple of this phase. More on that later. Phase 3 begins much longer intervals and tempo runs to improve overall endurance. Phase 4 is generally your peaking phase and culminates in your goal race. The duration of each phase can vary (and there’s some science in how to figure that out too), but in general you will spend 3-4 weeks per phase.

So why do I need 200’s when I’m training for a 26.2 mile race? The answer begins in Phase 2, and if you try this, I think you’ll see a difference. When you begin Phase 2, running 200m at mile race pace HURTS, and you may even miss your goal times if you haven’t done short speed intervals for a while. But after 2-3 weeks of one 200m workout per week, your fast twitch fibers are recruited, and the leg turnover improves.

An example workout would be 12x(200m @mile pace, 200m jog). Now you ask, why do I care if I can run 200s faster than before? The mile race pace feels easier, so when you begin the slower paced intervals and tempo runs in Phase 3, that pace feels MUCH easier. Since you’re now hitting your Phase 3 goal times faster, you are increasing your overall VO2 Max, and ultimately your Phase 4 races are going to be quicker.

Learn more advanced training strategies and get a customized training plan based on your goal race at the High-Altitude Training Institute. 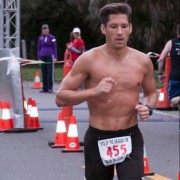 John Davis is a VDOT O2 Distance Coach, certified by running guru Dr. Jack Daniels. He has years of experience coaching both adults and high school athletes from beginner levels through advanced elites. He is not only a coach, but a dedicated and passionate runner himself. Read more about John...